In the effort to meet CDC  Covid-19 Guidlines we have implemented a 6ft spacing in between each Barber Chair. Our Barbers also completely wipe down their Barber Chairs after every Patron is serviced. Hand sanitizer is also made available for our Clients at our front desk. We also encourage you to check your temperatures at our front door thermometer if you are feeling warm. Our objective is to continue to improve our saftey measures where ever it is possible.

(APPOINTMENT ONLY )     (NO WALK-INS) until further notice. We will try and fit you in  if a Barber is available.

Mask must worn while inside of the Barbershop to rececive service. It may be removed temporarily to perform beard services, however we ask that you refrain from talking as this service is being done. No waiting area will be available at this time and social distancing practices must be used as much as posible. If you are feeling sick or ill please reshedule your appointment and stay home.

Our Waiting Area Is Temporarily Closed. Limited outdoor seating is available at this time.

A bigger floor plan, WiFi and LED Lighting have been implimented to add to your Barber Experience.

To make an appointment, please call the Barbershop at (301) 483-6670. you can also contact your Personal Barber by cell phone or booking apps.

Stay on top of the latest trends with Mr.Smith's Barber Studio. 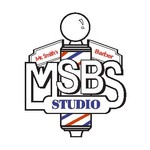 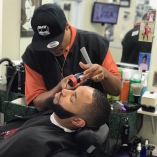 Howard L. Smith Jr. brings 32 years of barber knowledge and experience to your visit at Mr.Smith's Barber Studio in Laurel, MD. His faith in God and family are the staples of this vision. He is a proud graduate of Bladensburg Barber School in Bladensburg, MD. After a brief enrollment at Montgomery College in Takoma Park, Maryland he decided to go another route and pursue his journey of business ownership. He cut his teeth as a rookie barber in a Beauty Salon in Silver Spring, MD in 1989 where the presssure was on to develope quickly and produce as the only onsite barber.  He then arrived in Laurel, MD in 1990 and began his barber career at Don's Barbershop which was at that time the only African-American barbershop in Laurel. After a  formative five year  stint at Don's he moved onto Headquarters Barbershop in Laurel, MD where he trained and honed his managerial skills for another five years. With 10 solid years behind him he partnered with the late Mr. Charles Wison to launch Mr. Smith's Barber Studio on February 1, 2000. His vision was to create an atmosphere where barbers could hone and develope their own skills and one day become shop owners themselves. Some barbers realize that shop ownership is not for them but they are still able to earn a quality living while giving themselves an opportunity to pursue their true passion. Mr. Smith has also helped and encouraged many barbers who were not officially licensed before they arrived to persue and get their credentials. We are proud to say that this vision has produced several licensed barbers as well as (6) six Barbershop Owners, (5) five in Maryland and one in Atlanta, GA.  As the industry has continued to evolve, Mr. Smith's Barber Studio's vision has evolved as well to include a brouder approach to it's marketing efforts. Realizing that the barber game is no longer just a local community venture but a globel endevor, the MSBS Apparel Line was launched in 2016 to spotlite the great barbers that represent the DMV area! Now, with the arrival of Barber Battle Events and Expos the MSBS Brand has become a proud and active sponsor of  the DC Expo and DMV Illest Barber Events! This vison has and always will continue to grow and evolve in order to reflect an ever changing industry.

Limited appointments are now available for new clients for Mr. Smtih. Book online and pay in advance at www.styleseat.com/msbscutz